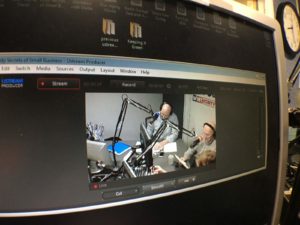 Jack Mencini and Adam Sonnhalter, co-hosts of Dirty Secrets of Small Business, which airs live on Wednesdays at 7:30 pm (EST) on WINT 1330 AM and 101.5 FM, discuss the question: Why are the small guys, the small business owners, ignored?
Both men are also business partners and small business coaches with Maximum Value Partners (MVP) www.maximumvp.com who delve deep into the discussion of why this is the case that the small companies are often ignored for business loans and their impact on the community. Why aren’t they more celebrated, promoted, and appreciated like the bigger companies? These small companies have great stories to tell as well.
Why it is this the case? Jack starts the discussion by saying that many small business owners lack the insight and tools to be professional self-promoters and the ability to present and tell their business story in an appealing or sexy way to grab people’s attention.

Owners of small businesses don’t think bigger because they don’t know how to go about getting the financial backing for cash and capital to grow their businesses as those who are among the venture capitalist (VC) and the Wall Street types. A small business owner does not command that kind of attention to make the VC or Wall Street maven stand up and take notice. What is alarming is that the small business owner is not looking to borrow huge sums of money in the millions to make a go of it, but rather amounts that are in the lower spectrum being in the tens or hundreds of thousands of dollars.

There is a definite market for small business owners to stand up and be recognized and not ignored. Marcia Pledger columnist for Cleveland.com and The Plain Dealer had an ongoing column for ten years title: My Biggest Mistake and How I fixed it http://amzn.to/2pDNSq8

The book is an interesting compilation on small business stories. The chapters give an inside look of how the challenges within small business were addressed and solved. These stories resonate with people because folks can relate to them and get their hands around them pretty quickly. They are real stories that many of us have experienced ourselves. Most of us can relate to dealing with families issues (whether it be as part of a business or not). Almost none of us can relate to raising hundreds of millions of dollars from Venture Capitalists or selling our company for billions of dollars, yet those stories are the ones most often told.

Several recent television programs give some insight for how to tell the stories of small business in an interesting way: The Profit with Marcus Lemoni and the long-running Shark Tank with 5 VC individuals, who weekly skewer the small business individuals who are presenting. Yes, these companies aren’t being ignored, but many times they are not getting the backing they need to make a go of their small businesses. And for each of these stories being told, there are millions more!

Sometimes, these shows have a negative effect on people who might be thinking about starting a small business. Jack and Adam have the feeling that a potential small business owner will watch the Shark Tank and it scares people about going to ask for money. Why would anyone want to subject themselves to 5 individuals who seem like they are ready to be the firing squad?

In digging deeper about supporting small business, Jack feels that the system is rigged against small business. “The people who make decisions on dolling out the big bucks are usually made up of government bureaucrats, professors or college ivy league types who have never run a business themselves.

“People who are in power to doll out the dollars are usually looking at high tech start-ups. These high tech companies are not what you would consider Main Street USA.” Jack feels it is rigged by the VC who would not help the small business and the Main Street USA companies to get funding to grow and expand. For these small businesses, it is often times just too hard to try and get the smaller loans.

Jack states that many VCs make the decision to not give money to a small business because it is not fancy enough. The florist on Main Street USA…the VC sees nothing sexy about giving her money to improve her company. It is a sad truth that 25 million jobs can be created in small companies if there were to each get better and simply add one employee. But, a fancy professor or bureaucrat or Wall Street guy will not see it as sexy to give $50K to a florist to help her business expand.

Jack further explained another example of the system being rigged. One of MVP’s clients, who was not a fancy high tech company but a solid company, wanted to expand and go to a suburban community. In order for him to do business in this community, he had to pay the mayor off in an “under the table” deal because the mayor did not want that business in his community. If it had been a sexy IT company, the mayor would have been head over heels to do it. The small business owner did not go through with giving the pay off.

For more info on how not to be ignored as a small business and the topic of purpose versus profit, tune into this week’s May 10 podcast on iTunes or http://maximumvp.com/dirty-secrets-small-business-radio-show-podcast/ or call Jack or Adam for help with your small business challenges at 877-849-0670.

Do you have any How Questions of your own to email to Jack and Adam? Do it by sending your questions to radio@maximumvp.com or submit a question on their web site at http://maximumvp.com/how/

You can also call in during the show each week when you are listening on Wednesdays at prime time 7:30 pm (EST) on WINT 1330 AM and 101.5 FM. Or call 440-946-9468 to ask your question to the Maximum Value Partners’ coaches or tweet your question to @MaximumVP.

The post Why are the small guys ignored? appeared first on Maximum Value Partners.

Posted in: Your Vision
Prev

How do you know when to fight?

How do you get the owner of a dysfunctional company to change?